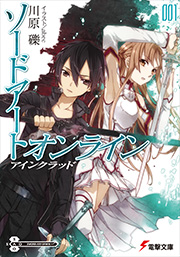 The animated TV series “Sword Art Online” is based on author Reki Kawahara’s light novel (winner of the 15th Dengeki Novel Award Grand Prize) in which the protagonist Kirito fights to survive in the mysterious next-gen VRMMORPG called “Sword Art Online.”
Since the first volume of the novel was published in April 2009, the series has been extremely popular with cumulative sales exceeding 12.5 million units in Japan and 19 million worldwide. Because of its popularity, the series has been adapted into two animated series, in addition to several games, comics and merchandise. In Spring 2017, “Sword Art Online The Movie – Ordinal Scale –“, a brand new original story written by Reki Kawahara, is set for a theatrical release. SAO fans around the world are anxiously anticipating its release.